The Writer as Migrant, by Ha Jin

Early in this book of essays, in the Preface actually, Ha Jin states that his “choice of the word “migrant” is meant to be as inclusive as possible—it encompasses all kinds of people who move, or are forced to move, from one country to another, such as exiles, emigrants, immigrants, and refugees,” and reveals his intent to “place the writer in the context of human migrations” in order to “investigate some aspects of the “migrant writer’s” life and work.” 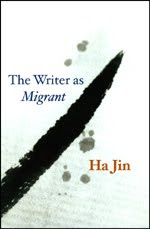 Later: “My observations are merely that—my observations. Every individual has his particular circumstances, and every writer has his own way of surviving and practicing his art.”

Initially presented as talks for the Rice University Campbell Lecture Series in 2006--see a write-up here --these essays focus essentially on questions of a migrant writer’s sense of identity, how closely tied or not it is to his/her originating country, whether the writer carries a sense of spokesmanship/representation, what part language plays in this sense of identity and the persona the writer adopts—both the mother tongue and the language “of betrayal” the writer chooses to use in the land he/she has migrated to-- what “homeland” comes to mean to the migrant writer, and whether the experience of “homeland” can remain static. Each essay returns overwhelmingly to the conclusion that seems to be at the heart of Ha Jin’s questioning, that ultimately it is only the writer’s ability to transmute his politics and struggle into art that ensures his survival: “His work will be of little value if not realized as art.”

I started reading these essays because, being someone who stepped outside her home country, chose to travel, and eventually found herself continuing to live and write in the United States—yes, a longer subject I will explore one day—I’ve become awfully interested in the experience of other “migrant” writers, and curious, too, about their perceptions and configurations of their experience. I’d recommend this collection to anyone in a similar situation thinking about these things, it’s a thought-provoking set of essays, and offers context, a way to begin or write around some of these questions of identity and intention.

I admire Ha Jin’s work and find his thinking interesting. He is rather extraordinary because he started to write in English only after the Tiananmen massacre in 1989—see Exiled to English; like Nabokov and Conrad, whom he writes about, he chose to write in a language other than his mother tongue. In this month’s Paris Review where he was interviewed by Sarah Fey, he says—in that portion of the interview that The Paris Review allows us to view online: "To be a literary writer does not mean just to write books—you need to look for some space in a language and find your niche in it. That was what intimidated me. Beyond the practical reason of earning a livelihood, there was the desire for a meaningful existence despite the forces that mean to reduce and silence you. In this sense, for me, to write is to suffer, but there is so much meaning in it that I must fight my battles on the page."

Vladimir Nabokov, Joseph Conrad, Lin Yutang, the exiled Chinese writer whose The Importance of LIving I found fascinating when I first read it at 13, Alexander Solzhenitsyn, V. S. Naipaul, Milan Kundera, the German writer W.G. Sebald, James Joyce—these are the writers he considers at length, writers exiled and expatriated, often writing in a foreign language, and yes, it’s interesting, sobering, to consider their peculiar predicaments and longings: Solzhenitsyn wanted desperately to return to Russia, as Lin Yutang to China; Nabokov saw Russian as a dying language and rejected the totalitarianism of the Russia he withdrew from; Conrad wanted to represent the Polish even as he felt the only way to survive as a writer was to write in English.

I found much in these essays that made me think and want to write more about issues of identity, writing intention, and notions of home or homeland. I found the breadth and depth of Ha Jin’s scholarship impressive. I liked especially his open revelations of his own struggle with notions of identity and writing self, his inclusion of his poem “In New York City” after his reading of Naipaul’s “A Bend in the River,” where he first encountered the notion of “the insignificance of an individual to the tribe.”

I found it troubling though that no women migrant writers or characters were considered in any depth. Apart from brief mentions of (male) immigrant characters in Willa Cather’s My Antonia and Sigrid Nunez’ A Feather from the Breath of God, a textually-anonymous quote on homeland from Belkins Cuza Male—attributed to her only in a footnote, as taken from an anthology, Looking for Home; Women Writing About Exile, a mention of Nadine Gordimer’s views on writers as needing to be political, to embody conscience from The Essential Gesture, mentions of Eileen Chang, Pearl S. Buck—women seemed non-existent in this discussion. To be sure, it is a set of private observations, by a male writer—but it is also a set of public observations, by a male writer. To a woman reader, such an omission does not merely feel peculiar, it feels supremely wanting.

Underneath all the tropes of exile, lay, or perhaps I should say, rowed Odysseus. For eternity, rowing into every masculine paradigm of exile and migration, taken apart, picked over, gazed at, eternally eulogized in this gaze. Odd, when his sojourn into the unknown began with an imperialistic quest (remember that wooden horse in Troy?). And where are all the Greek goddesses of exile and migration and departure and arrival? (Okay, maybe they don’t exist, there’s abduction and marriage instead preceding travel (Persephone, Helen)—but must we for all eternity fixate on Homer, on Odysseus?!)

Must men write only about men? Do male writers believe, accept, and deliberately perpetuate the notion that literature is quintessentially male, and one’s scholarship and diligence and seriousness is inevitably to be proved only by a scholarly focus on past male writers—a practice which tends to further idolize and exalt said past male writers? Sometimes, it seems so—this is what I found most difficult about this book.

I am conscious that Ha Jin is seeking to write “within the tradition,” so to speak—he states early on that exile is his particular interest and as such, Nabokov and Solzhenitsyn and Conrad and the others cannot be overlooked—he also states that the most significant literature of migration is that of exile—can this be true? I also wonder if his choice of subject was not tempered by the occasion of the lecture series prompting the creation of these essays.

Still, in this century, to not strive to be inclusive across the genders feels inexplicable to me. Women writers write frequently of male writers—do male writers write seriously of women writers? Apparently we still exist in a straitjacketed space where a male writer would need to be consciously radical in order to bring up and talk about a female writer—on par with/among male writers—it’s not the looked-for, prized, or awarded thing. Not recognized as normal. Or even plausible.

I have to say I wouldn’t want that to be the last word on Ha Jin’s essays, which I found mostly enlightening. Exile is a powerful subject, and I thought these essays insightful in many ways. I know I’ll want to read them again, when I sit down to write more about migration.

I found it interesting also that in an interview Edward Said too says he has felt a strong affiliation with Conrad—despite the exclusions and bias (which he excuses as emblematic of his time) in The Heart of Darkness—Conrad was a teenage runaway, an exile from very young, a sailor with the British Merchant Navy, a world traveler, who learned English at 20 and became a writer in his forties, who still retained a strong nostalgic connection to the Poland he never could quite return to in his work—and as Ha Jin notes too, an extraordinary writer in English. “He had this strange sort of exilic consciousness; he was always outside any situation he wrote about, and I feel that affinity with him.” (Said/Power, Politics, & Culture/Interview with Eleanor Wachtel, 1996). Evocative, isn't it—from both their readings; makes me want to read more of Conrad now.